Click on any animal's name for a link to their ADGA genetics page, including LA scores and DHI records. 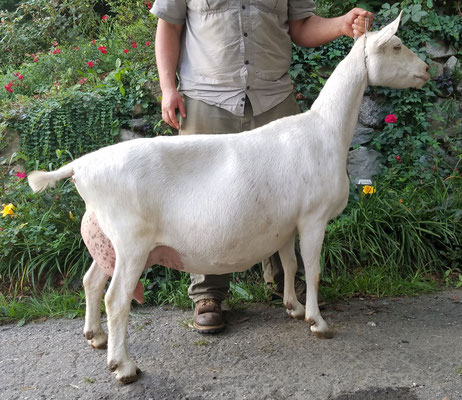 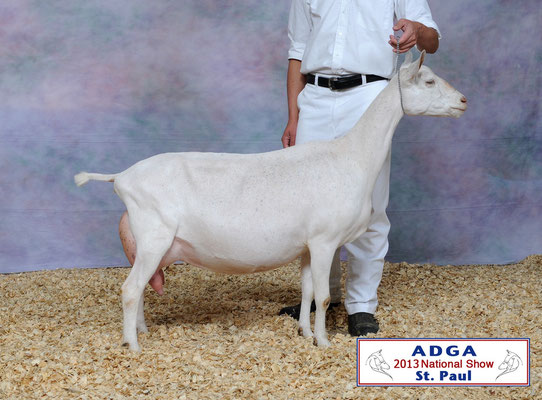 Changes was the herd matriarch and a farm favorite. She passed on her strength and depth to her progeny as well as her even temperament and sweet personality. Her 2013 AI outcross breeding to SG Des-Ruhigestelle Elander resulted in triplet does, two of which remain on the farm today. Those daughters, Heat Wave and Weather, have set the standard for our Saanen herd. In 2015 she had a difficult kidding that resulted in a mild bout of mastitis and her lifetime production totals reflects it. She is greatly missed.

A dry yearling in '20, Lego freshened this year with a stunning mammary. Maternal half sister to Weather, and line bred on Heat Wave, we had high hopes for her. She proved us right when she stood 6th at Nationals and scored 89 VEEE as a FF this summer! An absolute sweetheart, we're still working on the whole "walking gracefully in the show ring" part of things.

Losing Lego during kidding in '22 was incredibly difficult, but at least she lives on in her daughter. 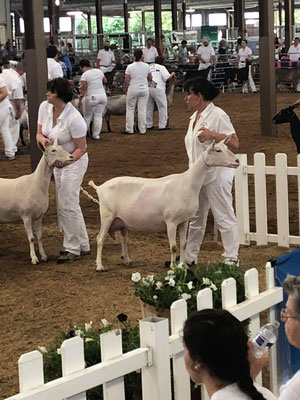 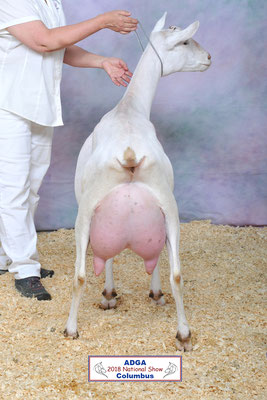 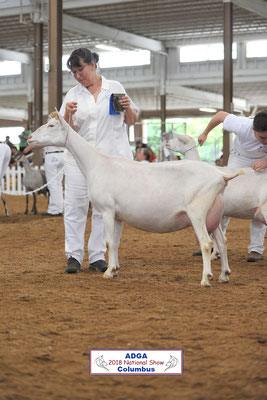 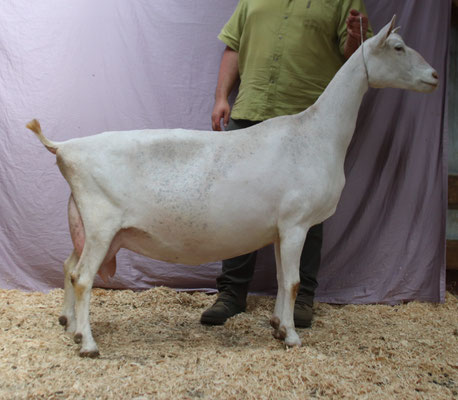 Ellie doesn't need much introduction in our herd. After her win in the 2 year old class at the 2018 Nationals, shes gone on to win BIS 7 times in her young show career. With her incredible general appearance (she glides around the barn and the show ring) and with her stunningly productive and shapely udder, there's no question why. She's longer with a more level topline, more correct in the front end, stronger on her feet and legs, and has one of the better rear udders in the herd. Except for her tendency to not give us doe kids, there's not much I would change about her! We are very excited to see what her 2019 AI son by Des-Ruhigestelle SocialClimber can do for our herd. We will be using him significantly this fall. Ellie had an extremely rough 2020 kidding so we are grateful she's still with us and hope we can bring her back into the show ring in 2021. 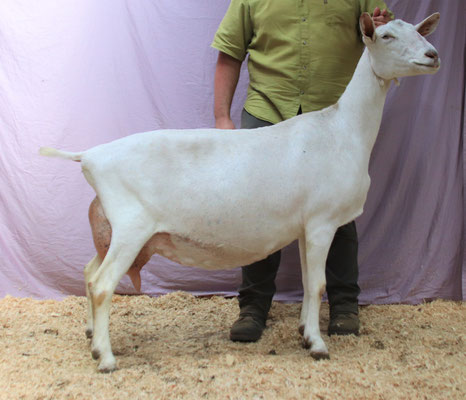 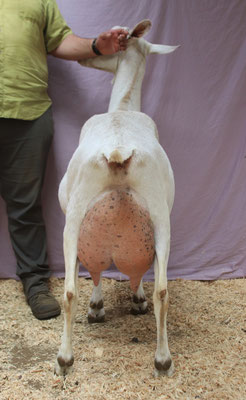 Littermate to Honky Tonkin and Purple Haze, Foxy has always been a farm favorite. With her massive scale and strength of bone, she certainly stands out in the show ring. While her udder is as beautifully shaped as her mother and sisters, her production reflects having been a precocious dry yearling with mild mastitis.

Halelujah was one of Cullen's favorites.  We loved her general appearance.  While not an extremely tall doe, her smoothness of blending particularly in the front end assembly was exceptional.  She also had a lovely udder, especially well attached and high in the rear.  This is a trait she consistently passes onto her daughters.   2013 ADGA National show,  second place with second udder in the aged doe class.

Praise was our first Halelujah daughter and was very similar to her dam.  Her udder had the same height and strength of overall attachment and she carried the same lovely general appearance of Halelujah.  If there's one area of the scorecard in which she excelled her mother it was in body capacity, particularly in her depth of rear barrel. She produced lovely sons and daughters, including the 2013 Jr National Champion Saanen, Spinning Spider Hawk's Hotlips.

Providence is a Halelujah daughter by Noble-Springs Zeppelin.  2014 was her year to rise in the show ring, easily finishing her permanent champion status and her superior genetics.  She beat her half sister, Gratitude, in the ring at the 2014 ADGA Nationals and has matched her production step for step.  In 2016 she was second place with second udder 5-6 year old milker at nationals. Her son Spinning Spider AP Babylon has been retained for use in our herd.

Edelweiss was purchased as a kid from Will Pearson's fine Saanen herd.  As a yearling she stood second in her milking class with first place udder at the 2010 ADGA national show.  Her udder has continued to improve as she's aged into a beautiful doe.  She's a long and powerful with depth of body.  Along with her many BIS show wins, she's been a foundation doe for the herd and consistently one of our best producers with high protein and butterfat.  She stood 6th place in the 4 year old Saanen class at the 2013 ADGA National show and 9th in the 5-6 year old class at the 2014 Nationals and has been anchor to most of our dairy herd wins.  Added to that, she won the high 305 butterfat award at the 2014 Nationals.  What we love most about Edelweiss is that her daughters follow in her footsteps, both in production and type.

Cassandra exemplifies the type of Saanen doe we breed for.  She was sharp, angular and naturally uphill with smooth shoulders and a deep brisket.  She was also deep bodied and beautifully proportioned.  Over 7 lactations her udder remained high, wide and well attached.  Unfortunately, kidding season 2012 proved too much for her.  We miss her but know that through her progeny she has contributed to that "Spinning Spider" look so many of our Saanen does now carry.

Chantal was the total package of our breeding program.  Appraising 92EEEE in 2011 as a three year old second freshener and 91EEEE after a long trip to the 2012 Nationals in Colorado, we felt she had the potential to surpass Cassandra. This was no surprise as her dam, Chloe, is a paternal half sister to Cassandra with similar dam lines.  Along with her lovely style and conformation was a tremendous will to milk even with a challenging show schedule.  We lost Chantal on Christmas day 2013.  It was a tremendous blow to our family as she was truly cherished. On a bright note, in 2013 she kidded with triplet daughters who are proving themselves every day.  Her 2012 buck kid, Spinning Spider Fortunate Son now has milking daughters in the herd that also reflect Chantal's conformation and production.