Changes is the herd matriarch and a farm favorite. She had a show career with 5 times GCH, 4 times RGCH and 1 BSDIS as well standing 4th at the 2013 national show in the two year old Saanen milker class and 7th in 2014 in the three year old class. She's passed on her strength and depth to her progeny as well as her even temperament and sweet personality. In 2015 she had a difficult kidding that resulted in a mild bout of mastitis and her lifetime production totals reflects it. Changes' 2017 production with 233 DIM was 1894 lbs milk, 51 fat (2.7%) and 53 protein (2.8%). Her 2013 AI breeding to SG Des-Ruhigestelle Elander resulted in triplet does, two of which remain on the farm today, setting the standard for our entire herd. 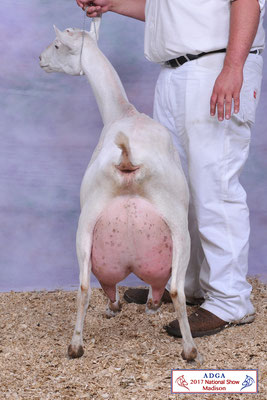 Weather is a beautiful, productive doe that's passed on her conformation to her progeny. Her show career has seen her going 5 times GCH and 3 times RGCH along with an 11th placing in the 3 year old milking Saanen class at the 2017 national show. Along with showing, she's proven herself in the parlor with a 2017 production record of 4524 lbs milk, 135 fat (3.0%) & 120 protein (2.6%) in a 305 lactation. Weather suffered an injury winter 2017 which ended her show career but her daughter SG Spinning Spider Electric Lady shows tremendous promise in following her dam's footsteps.

Ellie is our incredible Weather x Trident daughter. She proved herself in the national show ring by winning her 2 year old class at the 2018 nationals with first udder. She then went on to win BIS in the next 5 shows she entered that fall. While she didn't show at nationals 2019 she continued to prove herself in the regional show ring with 5 more Best of Breeds and 2 more BIS. As she's matured her production has continued to increase, peaking at 18 lbs this year. 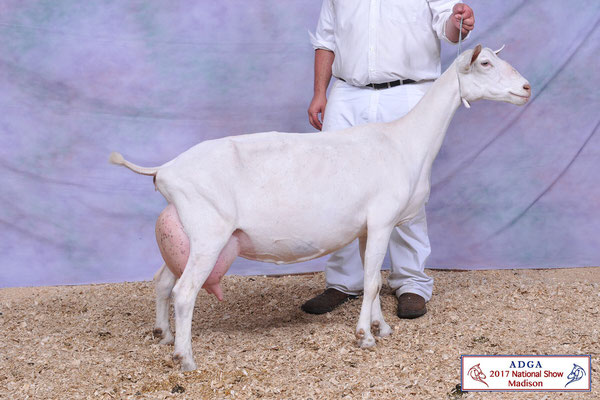 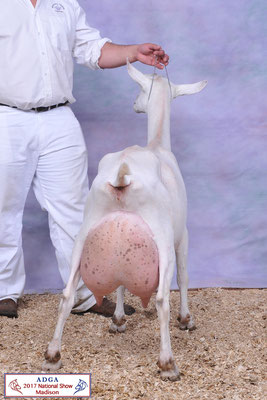 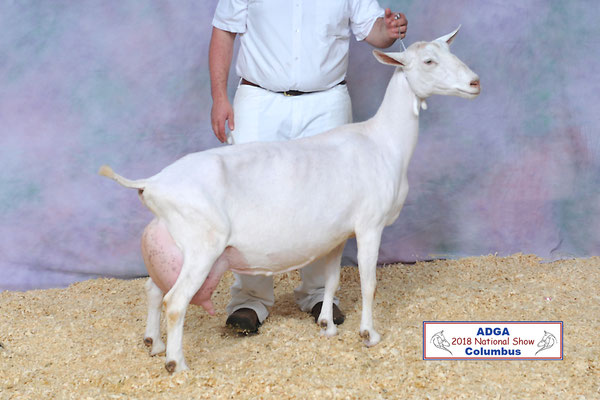 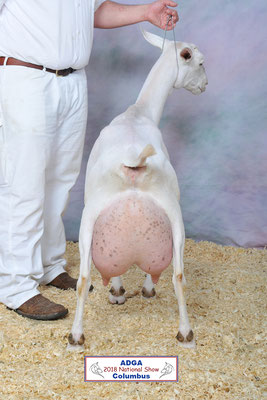 Heat Wave is the farm favorite for many reasons. She's got her dam's calm demeanor and loving personality. We believe this is one of the reasons she's been able to handle the stress of travel/showing along with life on our commercial dairy while still maintaining extraordinary production. Her show career consists of 8 times GCH, 5 times RGCH, 3 times BSDIS along with a 10th place in the 3 year old Saanen class at nationals and anchoring our 3rd place Saanen Dairy Herd win at the 2017 ADGA National Show. Her 305 day production for 2017 came in at 5206 lbs milk, 168 lbs fat (3.2%) and 154 lbs protein (3.0%) anchoring her firmly as a top ten breed leader in all three categories. 2018 National Show she was named Saanen Total Performer. We are using her son Honky Tonkin' in our herd as he exhibits her dairy strength and correctness while her milking daughters are proving themselves in both the show ring and the milking parlor.

Heat Wave and her daughters:

Summertime was a two year old first freshener in 2017 out of Heat wave and sired by Tempo Passa Win-Catchin' On. Her show career started in 2017 with one official GCH leg and a 4th place with 2nd place udder in the 2 year old class at nationals. She has a tremendous fore udder and a rear udder arch that is similar to her dam. Her show career continues to be strong with many 1st place class wins and several RCH. Her performance in the milking parlor shows consistency, peaking at 14 lbs this lactation.

Haze is a Heat Wave daughter, sired by Vineyard View Kojack Trident. She showed well in 2017 and stood 18th in the yearling Saanen milker class at the ADGA national show. Her production record for 2017 showed her to be a strong young doe with a will to milk. Her 2019 lactation has come with a deeper body and movement toward maturity, peaking at 21 lbs while also doing well in the show ring with two GCH wins. Her littermate brother, Spinning Spider Honky Tonkin is being used heavily across the herd..

Spinning Spider Foxy Lady, littermate to Haze and Honky Tonkin, is a two year old first freshener that shows tremendous size and scale. She came into her first lactation carrying too much weight and a mammary moderate in proportion to her body. We look forward to her next lactation and finding the happy balance between size and productivity.

No longer with us, Edelweiss lives on in her daughters. For more information on Edelweiss, click on the REFERENCE DOES tab.

Ritz is one of a set of triplet does from an AI of Edelweiss to Des-Ruhigestelle Elander. While all three of the does show strength and a will to milk, Ritz outshines them all in her own way. Freshening in 2016, we bred her back in the fall with expectations of an early 2017 kidding. We were in the process of drying her off when we found out she had slipped her pregnancy and decided to bring her back on the line and milk her through. Bred fall of 2017, we found she had such a will to milk she wouldn't dry off for her 2018 kidding. At 686 DIM she kidded and we assigned an artificial dry off date to be able to record this freshening. So while her CBCD data shows a 686 day 3730 lb lactation followed by 199 DIM 2980 lbs (in progress) she's actually been milking 885 days, producing 6710 lb to date on a continuous lactation. During this extended lactation she's also traveled to nationals and finished her championship. Bred for February 2019 kidding and in excellent condition, we can only wait and see if she allows us to dry her off this winter.

Leggy Blonde holds a place in our hearts as a doe who shows true Saanen temperament. She showed, milked and appraised well as a yearling and we had high hopes for her future show career. Summer of 2017 she met with an unfortunate accident, losing her right eye. For a doe on a commercial dairy (set on mountainous terrain) that has to negotiate within a large herd, we were worried she would have trouble adapting. We found the opposite to be true. She never missed a beat. Her milk test record immediately after the accident found her to be only slightly off her projected milk. She finished off her lactation at 283 DIM, 2761 lbs milk, 92 fat (3.3%) and 85 lbs protein (3.1%).